Solid Foundation Baseball School was founded in 1997 by former major league baseball player and Atwater Minnesota native Mike Kingery. Solid Foundation has at its roots the desire to encourage baseball players in their quest to be the best they can be, personally and athletically. The key to our success is the individual attention we are able to provide to each student through our focus on a low student-to-teacher ratio. 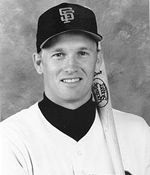 Mike Kingery played professional baseball for 17 years, including stints with the Kansas City Royals, Seattle Mariners, San Francisco Giants, Oakland A’s, Colorado Rockies, and Pittsburgh Pirates. During his career, he nearly won the National League batting title before the strike shortened the season in 1994 (he was hitting .349 at the time), he combined with Roberto Mejia to hit the first-ever back-to-back home runs at Coors Field, and he played alongside All-Star outfielders including Bo Jackson, Ken Griffey Jr., Dante Bichette, and Larry Walker.Mike was a highly decorated athlete when he graduated from Atwater High School in 1979, winning All-State awards in football, baseball, and track and field. He was signed as a free agent out of high school by the Kansas City Royals, but attended St. Cloud State University for his education. He progressed through the Royals’ minor league system and eventually earned a starting spot in centerfield in 1986, before being traded to Seattle, where he again played centerfield, only to give way to Ken Griffey Jr. Mike enjoyed the best years of his career in Colorado from 1994-1995.

Upon retiring from the Pittsburgh Pirates in 1996, Mike and his family moved back to his hometown. In 1997, Mike created Solid Foundation Baseball School, Inc. to answer strong demand from local baseball teams and players. Mike has trained his professional coaches to use hands-on instruction techniques he learned in the big leagues, helping players maximize their abilities and understand the basic fundamentals of the game. Mike believes that small student-to-teacher ratios are better for students, rather than cookie-cutter approaches without one-on-one instruction time.

Michael Miller is a 1979 graduate of Capital (WA) High School where he played baseball, basketball, and ran cross country. He was a 10 sport letterman, and led his baseball team to two straight appearances in the Washington State Class 3A Title Game, winning the state championship in 1979. Mike was named All-State MVP Runner Up Player of the Year.

Mike signed a letter of intent to play baseball at Washington State University. He was All-Conference and Player of the Year in basketball in his junior and senior seasons. At Washington State, he started four years in baseball, earning All-Conference honors his junior and senior year. He was named to one All-American team. Mike became the sixth round pick for the Kansas City Royals in the 1983 draft.

Mike has instructed, trained, and coached at various levels the past 28 years. He has held various positions at Solid Foundation Baseball School the last 12 years, supporting the mission statement wholeheartedly.

Terry Munoz graduated from Tokay High School in Lodi, California in 1980. At Tokay, Terry was a varsity letterman in football and baseball where he earned All-Conference honors as a pitcher and infielder. Terry went on to play baseball at San Joaquin Delta College and enjoyed a 6 year baseball career in the Japanese American California League where he was a starting pitcher and part time infielder from 1988 to 1994. Before moving to Minnesota, Terry served as the head Varsity Baseball Coach for Brookside High School in Stockton, California for 3 seasons where he led his team to two league championships.
Terry is married and the father of 3 children. At present, Terry serves as the Executive Director of Side By Side Ministries, a Christian Youth Ministry organization located in Golden Valley, MN. Terry is also involved in Youth Baseball in Buffalo, Minnesota where he enjoys coaching traveling baseball. He has been with SFBS for 10 years.

Todd Reid is a 1978 graduate of Maple Lake High School where he played football, basketball, baseball and drums.  Following high school, Todd attended Willmar Community College (Ridgewater).  Here he received the Dallas Kaehntopp Scholarship Award for Outstanding Freshman Baseball Player and was named co-captain of the baseball team as a sophomore.  Todd transferred to St. Cloud State University in 1980, where he also played baseball for the Huskies.  As a senior, Todd was the recipient of the Brainard Scholar Awards at St. Cloud State.  This award recognizes excellence as a student-athlete.  Todd also played 7 years of amateur baseball for the Maple Lake Lakers, participating in multiple state tournaments and conference All Star games.

After graduating from St. Cloud University in 1982, Todd spent 30 years with Kraft Foods in a variety of leadership positions.  With the Solid Foundation Baseball School, Todd has returned to his passion for the sport of baseball and mentoring young ballplayers.

David Wright is a 1985 graduate of Vanguard High School in Ocala, Florida. While at Vanguard, he played basketball and baseball. After high school, he attended Bethel College (now Bethel University) in St. Paul, where he played basketball (1 year) and baseball (4 years). During his senior season he was named captain of the baseball team. For the past 29 years David has been an elementary school teacher for the Saint Cloud School District. He coached baseball for several seasons at Apollo High School. He has continued to coach at various other levels for the past 14 years.